Nostalgic journey into the past

The era of the US armed forces in Hardheim endet on 13.02.1992. Not even a year later were their barracks, known as „Nike-Base“ converted into a housing for asylum seekers which is still existing.Numerously jung men from the USA were based in Hardheim till 1992 and absolutely present in the life of the „Erftalgemeinde“. Two of them – Mike Bussel („Buzzard“) and Mike Monroe – visited Hardheim on Monday, 01.10.18 and had a surprise with them.

They planned their trip for several days through Middle Euorpe since three years. They visited among others Zürich, Matterhorn, the October Feast in Munich and Heidelberg and also their old friend Kurt May in Hardheim. They are in contact for almost 40 years now.

Their visit in Hardheim, combined with a reception by major Volker Rohm, was for Mike Bussell and Mike Monroe their first visit in Hardheim since nearly 40 years. They were based in Hardheim for 2 years and 8 months between 1977 and 1980. At that time they spend their freetime not only in the barracks. Mike Bussell, who lives today in the small US federal state Rhode Island to the north of New York, quickly got in the Hardheimer Motorcycle Club „MC Pegasus“ and found good friends, one of them is Kurt May.

A very deep frienship developped in that time also to Bernhard Stolzenberger who died already in 2013. He was for decades a member of the German Red Cross in Hardheim and brought big efforts for this association. The first present of the two American was directly connected with this friendship. Mike Bussell and Mike Monroe donated 250 EUR for the Red Cross in Hardheim. Two children of Bernhard Stolzenberger, Vera and Tim, both are very commited in the association received the donation.

The second donation had their roots also in the past. 250 EUR were donated to the hospital. „Our Biker Friend Jürgen Lehr had a bad accident at that time and was medically very good provided in the hospital“ rememered Kurt May.

Mike Bussell, 60 years old now, was also dedicated in the „MC Pegasus“. The members met each other normally at the fountain on the todays „Place of the meeting“ between the former Cafe „Nickert“ and the company Beuchert. Mike Monroe lives in Florida and is regularly in contact with Mike Bussel despite the big distance between the „Sunshine State“ and Rhode Island.The second donation had their roots also in the past. 250 EUR were donated to the hospital. „Our Biker Friend Jürgen Lehr had a bad accident at that time and was medically very good provided in the hospital“ rememered Kurt May.

„It’s a deep friendship and Hardheim is our second home“, said Mike Monroe. In German: During the time of the US Army not only the deep friendship to „Buzzerd“ developed, but also a big solidarity to his „second home“ in the Erftal. He and his friend wore Poloshirts especially for the visit broidered with the emblem of Hardheim. One of the shirts got major Volker Rohm who was visibly delighted and one got Kurt May who translated during the reception and received the Thanks of the Major for this meeting which is not of everyday manner. „This shirt is a nice sign for our friendship“, explained Mike Monroe. 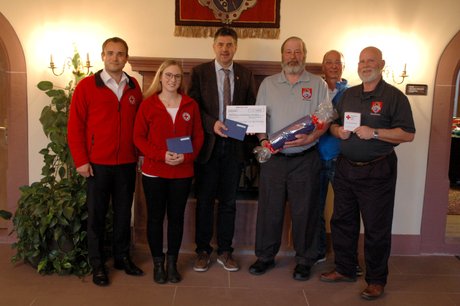 donate handover to the Hardheimer and gifts for the Americans 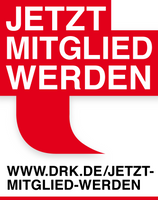